We are delighted to share our latest news with you.

As of March 2022, we have completed three rounds of funding, led by Hash Global, Libertus Capital, Liang Xinjun(Cofounder of Fosun), and Mask Network. Our lead investors recognize our contribution in the Web3 decentralized infrastructure and guide us in our journey to build the most significant open bandwidth marketplace in the world. 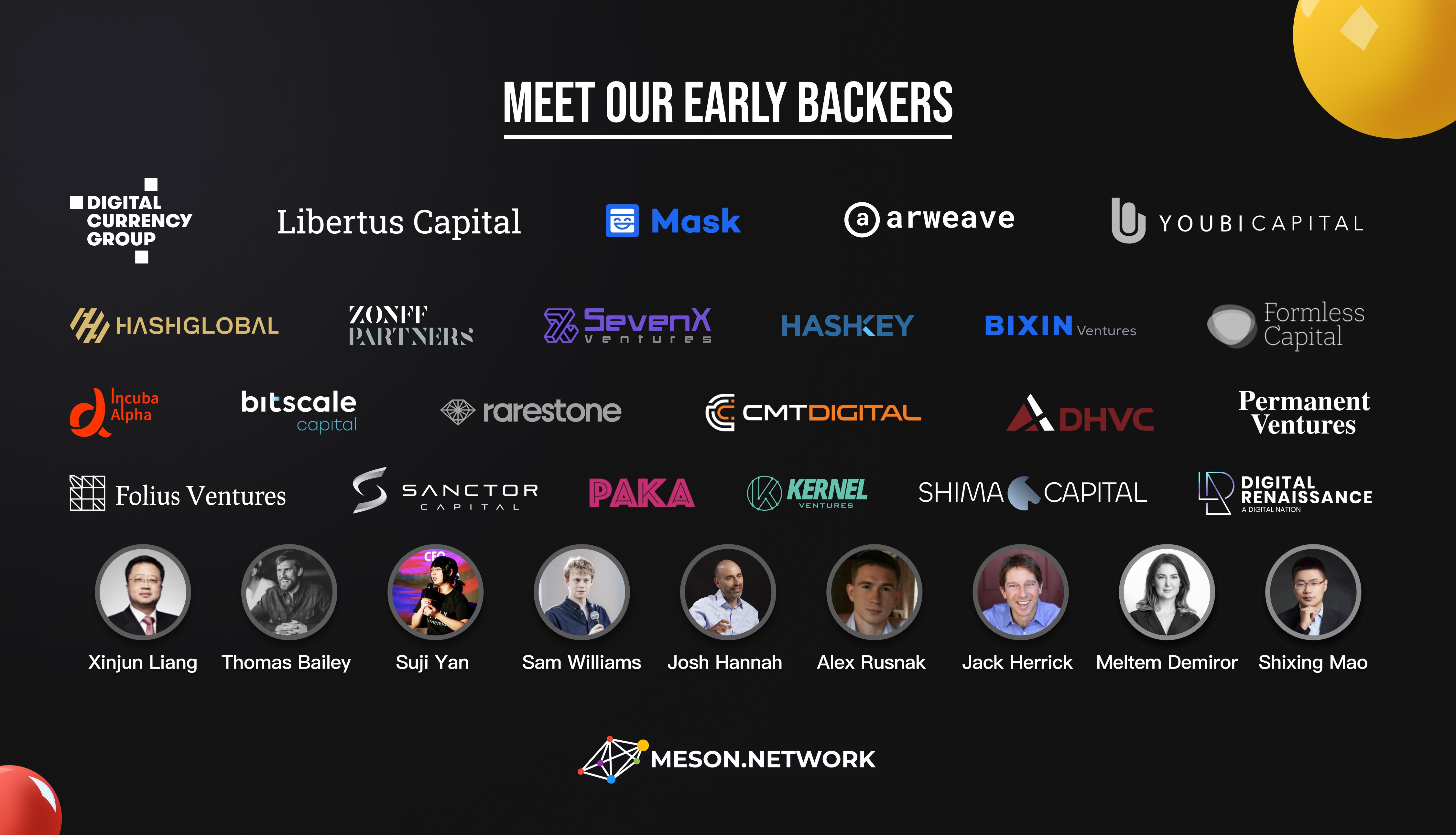 The Future We See

Meson is trying to create the world’s largest bandwidth marketplace in the future. Here, users can exchange their unused bandwidth resources with Meson for tokens, and those who need bandwidth will come to Meson’s market to borrow bandwidth anywhere in the world. To achieve this goal, we cannot simply use the direct sales model.

Existing cloud vendors rely more on a sales model, a top-down model, for aggregation of resources. For example, if you want to open a new local market, you need to recruit local people, and as the market coverage expands, the number of people recruited rises linearly or even exponentially. This model worked very well for the last 10–20 years because the sales model led to people targeting medium to large accounts, which can provide high output per account. But now, the situation is that a lot of resources are slowly dispersing to the long-tail market where the demand is much more fragmented, leading to much lesser output per account. However, demand from the long-tail market is growing stronger than the large account market. To capture the long tail market demand, there needs to be a new alternative to the direct sales model. The answer is open bandwidth exchange, done through Meson Network.

Meson can integrate resources from the bottom up. Users do not need to care about how to deal with people, they only need to upload or access the resources in the marketplace according to standards and protocols. The advantage of this new model is to remove human interaction in the system as much as possible, and to quickly achieve scale through free market mechanisms. Using the human sales model, if we are very lucky, we might create another Amazon. However, using the protocol model, we don’t need to define the composition of roles at both ends of the market. Maybe a boring user connects his Starlink network to Meson; maybe a large number of developers connect different Telecoms around the world to Meson; maybe in the future, Meson’s market will cover the resources of cloud vendors such as Amazon and Google, but we are just a team of less than 100 people at that point.

The Past Achievement & Next step

Our testnet has gone through several iterations and bug fixes in the past, with node population ranging from less than 100 nodes in the early days, to over 50k(2021.08), to fluctuating around 30k recently. We have been providing stable bandwidth to Arweave, IPFS and applications using these storage facilities, helping Arweave and Solanart to provide stable and smooth access experienced to the hundreds of thousands of users, even during about peak traffic hours of 100TB per hour. We have also helped many application layer projects such as Matters, Permacast, RSS3, Cyberconnect, Koii, etc. 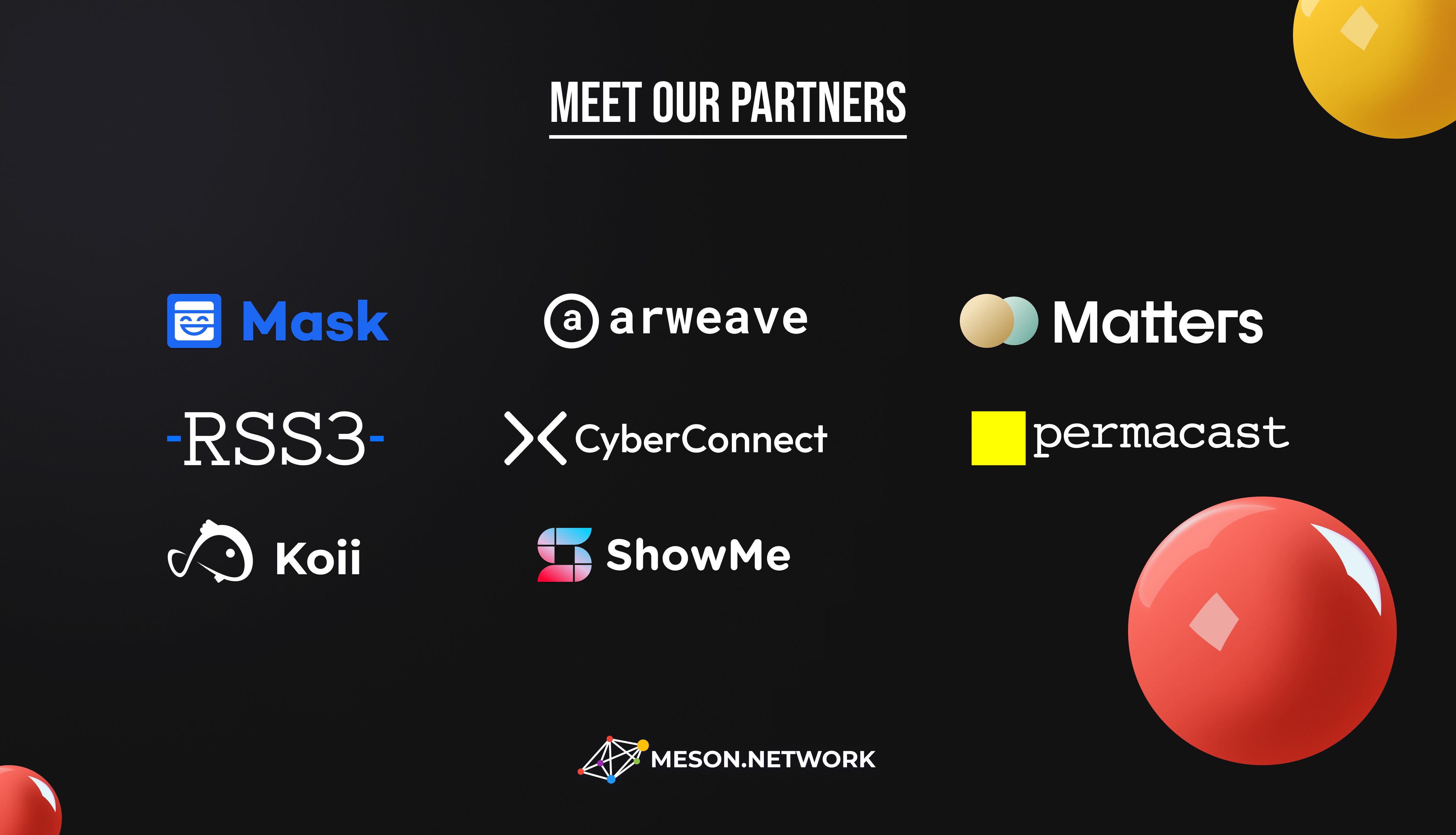 In 2022, we expect to launch the first mainnet version of Meson Network on Ethereum. Users can start trading bandwidth resources on Meson upon our launch. At the same time, we will design the token incentives and corresponding mechanisms for participants in the system. After the mainnet launch, we will support various EVM-compatible chains, lower the threshold for users to use the network, and begin to integrate decentralized home nodes as a complement to the network. In the third step, we will become the default provider of bandwidth resources for the Web 3 decentralized cloud. The future has come.